Last week, Team Germany were out in numbers in Europe’s tech start-up capital, Berlin, meeting with current partners, building new relationships and meeting up with some of the top talent the city has to offer. A short stop-off in Munich was followed by three consecutive days of meetings in Berlin. 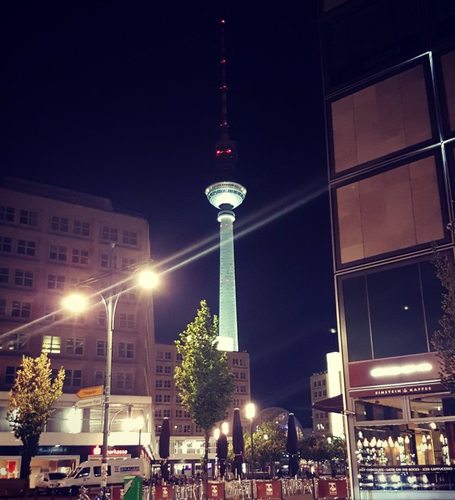 Following a short flight over from Birmingham and a confiscation of his umbrella, Stuart Day, Director of Talent Germany, was welcomed by torrential rain in Munich. Following a somewhat bumpy start, it was straight into meetings; the first one being with one of Germany’s leading document management companies, headquartered just outside of the city.  After a meeting with the head of recruitment, it was a short bus trip to meet the very candidate they had placed with them, which resulted in nothing but praise for the efforts of the team in getting him the position.

Next in line: a proper tech start-up, which set the scene for the rest of the visit – a company that has created a cloud-based, computer-aided engineering software that is taking the market by storm. Greeted by funky offices, Stuart gained access to the founder of the company, and it turns out the Talent Teach Team builders are exactly what they have needed, receiving some quality feedback for their efforts.

The final meeting of the day was with a Fintech company who are changing the way we pay. Having recently secured a 7-figure investment in round three funding, this means that the team are going to see some serious growth on the tech side, with options to grow out of Munich and possibly into the UK. Brexit? What Brexit? 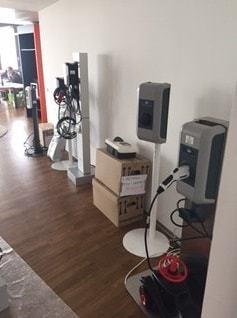 Having gone solo on the first day, Stuart was joined by Talent Tech builder professional, Maddie, in time for a second full day of meetings: two more in Munich to conclude the first leg of the trip, followed by a short hop over to Berlin for more meetings in the capital.

First it was off to a huge e-Commerce agency, where they’ve brought together six of the team’s favourite start-ups into one digital agency operating across northern Europe for a good run through on how to improve their recruiting experience.

Shortly after, it was off to Germany’s ‘one to watch’, a connecting mobility company helping to disrupt the automotive and utilities market, providing the data and software to power a connective network of renewable energy and self-driving cars, which actually makes it difficult to put into words the levels and complexity of innovation that is involved. When Uber come knocking for your technology, you know you have something special! Check out the charging points that hold their software!

A speedy retreat to Munich Airport wrapped up the first leg of the trip, leaving Stuart and his team roaring to go in Europe’s tech start-up capital, Berlin, with meetings planned with a globally connected digital fashion business over beers (what else in Germany?) and Europe’s second largest internet web hosting company; a company that we’re helping to build and have assisted already with numerous hires in 2017.

Day 3 and 21 meetings between 4 people awaited them! ‘Berlin’s tech start up scene, we are coming for you!'.

Team Germany kicked off their 3rd day in Deutschland with breakfast in the Apartment and straight out for a stack of meetings. First up, Insurtech, Berlin’s Premier Feedback platform, a coffee with a super cool tech platform for property management, followed by a meeting with a DACH region dry cleaning to your door service that has tremendous potential and a trip to the Berlin Zoo to join an Angel investor (for start-ups) – different setting but equally as enjoyable for the team.

Making sure they crammed in a few German delicacies between meetings, the team stopped off for a quick Bratwurst, before getting down to work again.

Next up was a really cool travel start-up looking to disrupt the market with some great new technology. Before meeting up with their new CTO hire and his developer friends they stopped by a visual media company connecting you to anything you see on tv or the internet…the technology is insane, let’s say, you see a bag you like on a TV show and within 20 seconds of the screen capturing It you are on the retail site for that product. Could be a game changer. To wrap up the day Stuart and the team met their new CTO hire and his developer friends. He was very commendable and extremely pleased that they had placed him in such a great company. He wanted to introduce the whole team to the Portuguese developer community. 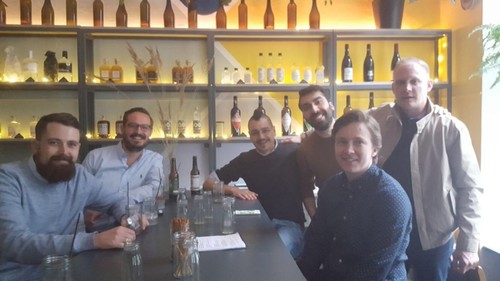 Thursday... Yes, you guessed it - more client meetings - this time with the likes of Zalando (arguably Berlin's most successful start-up, a dynamic mobile marketing automation company, two separate encrypted messaging providers including one which connects patients to doctors directly,  a disruptive EHealth platform, a young ad-tech innovator already working on a global scale and a pre-launch stealth mode start-up which has created a lifestyle coaching app. Disruption seemed to be the order of the day, with additional meetings in the logistics & shipping space and more secure encryption start-ups, a Saas business increasing sale conversions by a 25% margin.

The day was not done there: numerous candidate meetings with people the team either placed or will be placing into new companies very soon and then finally a sit down with one of Berlin’s most influential figures, the MD for Techstars, the bootcamp growing and advising new start-ups. It turns out the Talent Tech Start-up Team Builders are really getting noticed in the tech space, with the feedback suggesting that they're are actually disrupting the industry with their approach. I think the viral sticker campaign certainly helped… 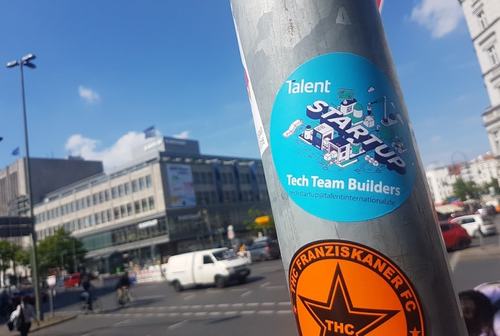 Having embedded themselves in Kreuzberg, lived like the Berliners, drunk like the Portuguese, eaten like the Italians and truly become the edgy tech start-up partner of choice, it was a really pleasing and successful trip for the team as a whole.